The world of the pre-Cryogenian

The Subcommission is the primary body for facilitation of international communication and scientific cooperation in Cryogenian stratigraphy directed at better understanding Earth system evolution during the Cryogenian Period (c.720 – c.635 Ma). Its priority is the unambiguous definition, by means of global stratotype section and points (GSSP), of a hierarchy of chronostratigraphic units that provide the framework for correlation of Cryogenian strata.
In recent years, in addition to defining the base of the Cryogenian System, rock-based stratigraphy before the Cryogenian has become one of the topics that our voting members and corresponding members' are discussing. Here we show some newly published papers on this subject.
Journal of the Geological Society(2021)

Shields,Graham A. et al.
https://doi.org/10.1144/jgs2020-222
The geological timescale before 720 Ma uses rounded absolute ages rather than specific events recorded in rocks to subdivide time. This has led increasingly to mismatches between subdivisions and the features for which they were named. Here we review the formal processes that led to the current timescale, outline rock-based concepts that could be used to subdivide pre-Cryogenian time and propose revisions. An appraisal of the Precambrian rock record confirms that purely chronostratigraphic subdivision would require only modest deviation from current chronometric boundaries, removal of which could be expedited by establishing event-based concepts and provisional, approximate ages for eon-, era- and period-level subdivisions. Our review leads to the following conclusions: (1) the current informal four-fold Archean subdivision should be simplified to a tripartite scheme, pending more detailed analysis, and (2) an improved rock-based Proterozoic Eon might comprise a Paleoproterozoic Era with three periods (early Paleoproterozoic or Skourian, Rhyacian, Orosirian), Mesoproterozoic Era with four periods (Statherian, Calymmian, Ectasian, Stenian) and a Neoproterozoic Era with four periods ( pre-Tonian or Kleisian, Tonian, Cryogenian and Ediacaran). These proposals stem from a wide community and could be used to guide future development of the pre-Cryogenian timescale by international bodies.

This paper shows the consensus understanding of many Precambrian stratigraphers who make up the ICS working group on pre-Cryogenian subdivision, chaired by Prof. Graham Shields.  The working group involves ~35 Precambrian researchers globally who worked out how the first 85% of Earth history can best be subdivided so that the names and ages of periods, eras and eons match known tectonic, environmental and paleobiological events recorded in the rock record. The hope is that this will allow more intuitive appreciation of our planet’s formative years for future scientists, students and the general public. A global debate ensued (mostly during the various lockdowns) that resulted in surprising consensus.  The attached figure shows the proposed timescale, along with some explanation, which forms the basis of a white paper that the working group is now submitting formally to the International Commission on Stratigraphy for their consideration. 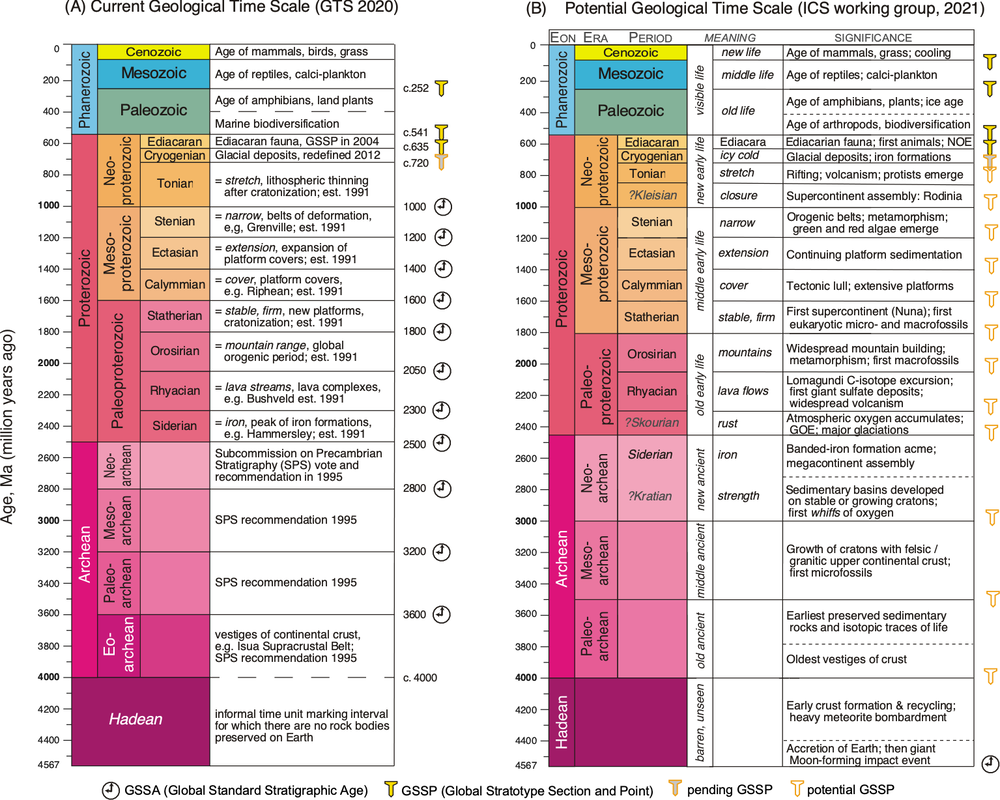